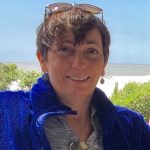 Mickey, her husband Chuck, and their 4 kids moved to the Augusta area in 1997 after an extensive North American tour with the Broadway musical CATS. They had been based out of Chicago where Mickey and Chuck both performed in area dinner theaters.

Mickey has performed in or choreographed many musicals including Hello Dolly, Gypsy, A Chorus Line, Anything Goes, the Wiz, the King and I, and the National Tour of Evita. She also performed in many children’s theatre productions, industrial shows, TV and print ads. She has studied theatre arts across the country and has worked under the direction of Harold Prince and Andrew Lloyd Weber.

After settling in Augusta, Mickey saw there was a lively theatre community here but it lacked a young actor’s musical theatre group. MTW, Musical Theatre Workshops was conceived! Ms Mickey has been teaching children of the CSRA musical theatre acting for over 15 years. Her background in professional theatre has made her a unique mentor and teacher. Ms Mickey’s performing career includes Broadway touring companies, regional theatre, industrial shows, commercial and print work, choreography and extensive directing of children’s productions.

Her enthusiasm for being creative and helping the younger actors find their gifts is contagious. Her goal is to bring out the gifts that God has given to all the kids that pass through MTW no matter their age. To help them gain confidence and let their voices be heard!

Melanie Wade Larsen holds a Master of Music degree in Music Performance from the University of South Carolina, Columbia.   Additionally, Ms. Larsen holds a B.M. in Vocal performance from Augusta University and was awarded the Lucie C. Ruzicka performance award. In November 2017 her article, “Shaking It Up:  From Rn to Vocal Instructor and Performer” was chosen for national publication in Classical Singer Magazine.  Her love of opera prompted her to develop “Opera Out & About” which is formulated to introduce elementary age children to the art form.

Ms. Larsen is an active local performer and can be heard singing repertory from classical, music theater, and jazz genres. Performing highlights include singing for internationally- known composer Libby Larsen while at USC, and performing the roles of “First Touriere” and “First Novice” in the concert version of Suor Angelica with the New York Lyric Opera in 2012.  Locally, Ms. Larsen has been a featured soloist with the Augusta and Columbia County Choral Societies and the Columbia County Orchestra.  Opera credits consist of comprimario roles with the former Augusta Opera and playing the role of “Hare” in A Day at the Beach, a children’s opera by composer Dick Maltz.  Music Theatre highlights include the role of “Old Woman II” in Les Miserables with the Augusta Players and serving as chorus director for The Music Man with the Aiken Community Playhouse. This year will mark her third appearance for Silent Movie Night and she will be singing concerts for both the Westabou and Arts in the Heart festivals.

Ms. Larsen has been teaching voice since 2007 and is a member of the National Association of Teachers of Singing. Her teaching uses concepts from the Alexander Technique, solfege /sight-reading exercises to increase musicianship, and emphasizes healthy vocal production.  She accepts students ages seven and up.

Claire has been in theatre since birth, making her debut in the ballet the Nutcracker with the Columbia County Ballet, carried onstage by “grandmother”.  Since then, she has been seen onstage in many MTW  productions including: Ladybug in James and the Giant Peach,  Baker’s Wife in Into the Woods,  JOJO in Seussical, and many more.  Favorite roles also include Sophie, in Mama Mia with the Augusta Players and Peter Pan, with GRAYT productions. Audiences have seen her onstage with the Augusta Jr Players productions as well.

She was recently awarded Outstanding Performance by an Individual Actress at the 2020 Jr Theatre Festival in Atlanta, GA..  Claire, has also been awarded best student choreographer for two years at JTF, for her work in Honk Jr, and Into the Woods, Jr..  Claire will be the choreographer for the upcoming season productions.

Shay is a homeschooled graduate, he has been taking classes at MTW for over 12 years, he has been seen as Grasshopper in James and the Giant Peach, Herb in Junie B Jones, Stromboli in My Son Pinocchio, among many others! He has also done productions with the Fort Gordon Dinner Theatre, Augusta Jr Players, and Greater Augusta Youth Theatre!
In 2019, he assistant directed Alice in Wonderland Jr. and in 2018 he was the Vice President of the Columbia County Teen Thespian Coalition.

Shay has also been a member of the MTW Junior Theatre Festival team for 4 years and in 2017 and 2020 he was selected as a JTF All-Star and got to perform in front of over 5000 people!